First Time In 15 years, Earth and Mars Will Be So Close. 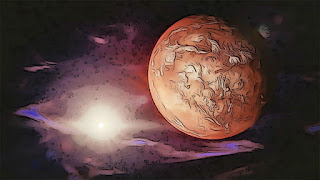 On the night of July 31, 2018, Mars will be very close to the Earth. In the last 15 years, both planets have never been so close. Mars will be on one side of the Earth and Suraj on the other side. All three celestial bodies will be in a straight line. Even though the Earth and Mars will be closest to the last 15 years, but the distance between them is 57.6 million kilometers. By October 2020 it will be the shortest distance between Mars and Earth. But in the meantime, the glimpse of Mars will be such that it will not be seen in the next 15-17 years. Those who saw the moon eclipse at night on July 27, they also had a glimpse of the planet Mars called the Red Planet. It was just below the moon.

For the first time in 15 years, the earth's so close to the planet Mars is itself a memorable celestial phenomenon. But in 2003 the distance between the two planets was 56 million kilometers. According to NASA, for the first time in 60,000 years, Mars and Earth were so close and such a situation could happen again in 2287.

Why does this happen?
Like other planets, the Earth and Mars roam the oval orbit. When Mars is at the closest point of the Sun in its orbit, then the Periheelic Exposure occurs. Such a situation was made on July 27, 2018, i.e. the night of the lunar eclipse. At that time, the distance between the two planets was greater than today. But it should be noted that being the closest to the Earth does not mean that it will be the brightest. In fact, the best visibility of the planet was estimated from July 27 to July 30.

Where to get the glimpse of this unique astronomical phenomenon
The best place to see Earth so close to Mars is the southern hemisphere. This means that India is not in the best position for this divine event. However, visibility will not be very bad. It has been speculated that this planet will be easily visible from all parts of India. But there will be no issues with Australia, South Africa or South America. To see the planet you will need a large lens (6 to 8 inches in size) a telescope. Regardless of this cloud may obstruct.

The long distance between Mars and Earth will be less. You will be able to see this scene since sunset and until the sunrise.